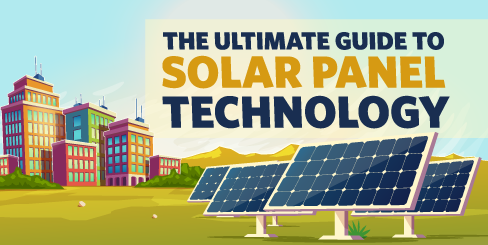 Harnessing the power of the sun has reached a whole new level. Countries all over the world have been getting a lot more energy to produce electricity than they do from other sources like coal, oil, or gas.

As such, solar panels are starting to become more common in homes and business establishments, which wasn’t exactly the case just a few years ago. Solar panel tech is revolutionizing energy consumption, and the technology is continuously evolving.

How well do you understand what solar panels are or how they work? In this infographic, we give a lowdown of what makes it possible for solar panels to produce electricity that powers the world.

How do Solar Panels Work?

The concept of solar power is pretty simple. It involves tapping the natural energy of the sun and converting it into electricity using solar panels. But what are solar panels, and how do they work?

Solar panels or solar modules are made by putting together solar cells, which are responsible for turning sunlight into electricity. These solar cells, also called photovoltaic (PV) cells, contain a thin semiconductor wafer made from two layers of silicon—one is positively charged, and the other is negatively charged.

Solar panels also consist of a metal frame, a glass casing with a special film surrounding it, and wiring to allow current from the solar cells to flow.

When sunlight hits the solar cells, energy is absorbed by the cells. This influx of energy around the wafer causes electrons from silicon atoms to move freely in an upward direction where the cells can generate direct current (DC) electricity from the sun.

This electricity is then fed into a solar inverter so that the DC can be turned into usable alternating current (AC) electricity for homes and offices, as well as various types of machinery. Inverters can be configured for an entire system of solar panels, or they may be individually attached behind the panels.

The transformation of sunlight into electric energy is known as the “photovoltaic effect,” which forms the basis for solar panel technology.

Trivia: The term photovoltaics comes from the Greek word phōs, meaning light, and the word volt, named after the Italian physicist Alessandro Volta.

Which Type of Solar Panel Is for You?

Solar panels for homes and other commercial establishments come in a myriad of options, each of which has varying characteristics. Whatever type of solar panel installation you choose will ultimately depend on the needs of your property, your quality or performance standards, and other similar factors.

The three major types of solar panels are monocrystalline, polycrystalline, and thin-film.

Meanwhile, the silicon cells that are used in thin-film panels are the amorphous silicon (a-Si) type. Thin-film panels may also be made from other PV materials with semiconductor properties. These are more expensive per kWp. However, they’re more durable, more flexible, better looking, thus more costly to use in a system design.

Most solar panels for home use are made up of traditional monocrystalline and polycrystalline. In contrast, thin-film solar panels are frequently used in power stations, buildings, or smaller photovoltaic systems.

This is the oldest form of solar panel technology, dating back to the 1950s, making it the most developed of the three. Molten silicon of the highest grade is used to create one solid crystal, thus called “monocrystalline,” before cutting it into wafers to be made into solar cells. And since it’s made of a single crystal, the electrons that produce electricity have more room to move. This generally results in higher efficiency than its counterparts.

The solar cells in monocrystalline panels typically appear with a black color and uniform look, indicating a good quality of silicon. As such they are generally more aesthetically pleasing than the blue or sometimes prismatic appearance of polycrystallines.

Monocrystalline solar panels generally have the highest efficiency rates in terms of performance and space. By yielding the highest power outputs, especially in conditions of low light and high temperatures, they tend to occupy less space. This kind of efficiency also leaves a positive impact on the environment since it means reducing the use of harmful fossil fuels that produce greenhouse gases.

This type of solar panel tend to be more efficient in warm weather and perform better than its polycrystalline counterpart in low-light conditions.

Monocrystalline solar panels also have a long lifespan because of the high quality of materials used, with a life expectancy of at least 30 years and power warranties of 25-30 years on Tier 1 panels.

Because of the long list of advantages they offer, monocrystalline solar panels tend to be the most expensive. This downside sometimes causes homeowners and building contractors to go for more cost-effective options like polycrystalline or thin-film solar panels.

It’s also common for this type of solar panel to run into circuit breakdown issues when something is obstructing the panel, whether it’s dirt, snow, or partial shade. As with all types of solar cells, the capacity of mono panels to generate electricity lowers as temperatures reach very high levels.

Polycrystalline solar panels can be recognized by the bluish hue of their solar cells, which is a result of sunlight bouncing off the silicon fragments.

These panels are made by melting raw silicon and pouring it into a square mold. Once the molten silicon cools, it’s then cut into wafers.

However, since the silicon used isn’t pure and are but fragments of silicon crystals, polycrystalline solar panels only have an efficiency range of 13% to 16%. This is lower than the efficiency rate of mono solar panels, which are pegged at 15% to 20%.

Another implication is that more space will be needed for polycrystalline solar panels to come up with adequate amounts of energy that can power up structures and their surroundings. For consumers who place a premium on aesthetics, poly solar panels may not be the best choice due to their uneven, speckled look.

Compared with monocrystalline and polycrystalline solar panels, thin-film solar cells (TFSCs) or panels are made from a variety of PV materials. These include silicon, cadmium, or copper.

Since TFSCs are slim—roughly 350 times slimmer than traditional solar cells—they’re more pleasing to look at, whether in blue or black hues. They’re also easy to produce, requiring only a small amount of materials while generating savings that make it possible for manufacturers to mass-produce them.

TFSCs are flexible enough to be used in different applications, from integrated photovoltaics to laminated windows and other commercial purposes. They also perform fairly well, even in high temperatures and low-light conditions.

On the downside, thin-film solar panels have an average operating efficiency of 9%, which is the lowest among the three. Space-wise, they require a larger space to cover before producing the desired energy output. For this reason, they’re more suitable in commercial rather than residential structures.

Thin films also typically don’t last long, so warranties offered by manufacturers are only good for a short time.

Powering the World Through Sunlight

Solar panels are beneficial in more ways than one. They’re an inexpensive source of clean energy, and now, it’s easier than ever to make them available in every home that wants to use solar power in the Philippines.

For inquiries in pricing and installation of solar technology for your property, contact SolarNRG Philippines, and let our experts handle your solar energy needs.