Climate Change: Facts That Will Make You Go Solar 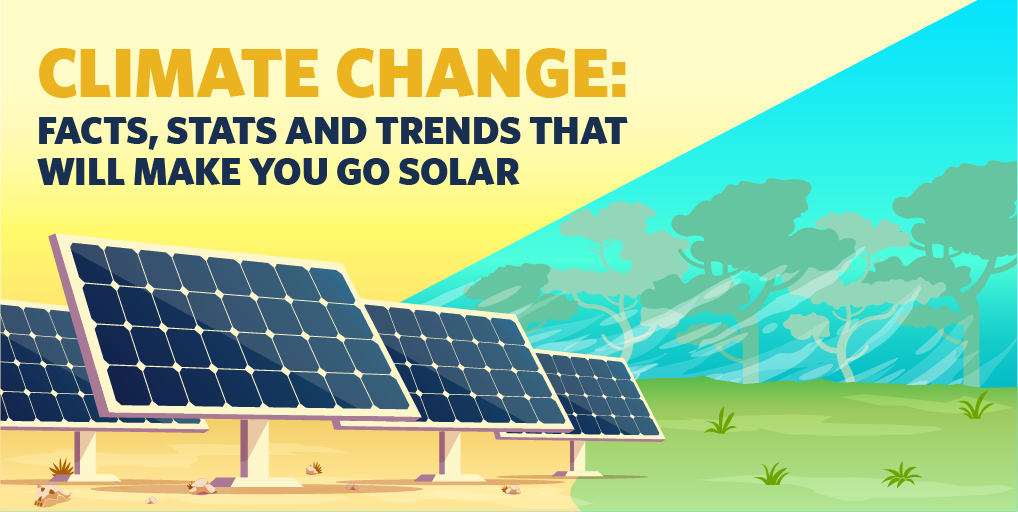 In November 2013, the Philippines was hit by one of the strongest typhoons ever recorded. Typhoon Yolanda, internationally known as Haiyan, swept the provinces of Leyte and Samar, with wind speeds reaching 315 km/h and five-meter storm surges.

Just last year, the archipelago again experienced the devastation brought about by a series of strong typhoons. It started with Typhoon Quinta, followed by Super Typhoon Rolly, culminating with Typhoon Ulysses, whose strength caught many by surprise.

Those living along the path of this trifecta had to contend with its effects amid a deadly pandemic. The situation was dire, to say the least.

Sadly, the situation can only get worse. You can expect freak weather disturbances to become more and more prevalent. Typhoons will increase in power. Places historically spared from them will be hit. All of these due to climate change. Here are climate change facts, statistics, and trends you should know.

The Devastating Effects of Climate Change

The Paris Agreement is an international treaty on climate change with the goal of preventing climate change from reaching beyond 1.5 °C above pre-industrial levels. However, the climate prognosis has remained grim. If current trends persist in terms of carbon emissions, come 2030, we might pass the threshold mentioned above. Such a scenario will have catastrophic effects.


Think extinction of a wide variety of plant and animal species, both land and water-based, the proliferation of disease-carrying insects like mosquitoes in places they did not thrive before, and entire cities and islands submerged underwater.

Long-dormant viruses and bacteria will revive and wreak havoc on the global population due to the thawing of permafrost, and intense natural calamities like unrelenting wildfires, destructive typhoons, and frequent hurricanes will leave areas in their path in ruin. These freak weather events may happen more frequently, even in places they did not usually occur.


Now, more than ever, we need to listen to climate change experts. Climate change is real. It is not a problem waiting in the future; it is here. And if we are to do something about it, we better do it now.

Individual and Collective Actions are Needed

If you feel strongly about the climate change issue, do not hesitate to speak up and take action. Let those who might not know as much as you do learn what they have to. Join relevant causes such as reforestation drives. Meet people who share the same values as you do and, together, engage as many people as you can.


You can also reach out to your representative in congress. Let your concerns be heard by the people who make the rules. They have the power to put laws in place that can curb the country’s collective carbon footprint.


As an individual, there are lifestyle changes you can make, as well. You can go minimalist and reduce the waste you add to the planet.

Be more conscious of how you consume natural resources, such as water and food, which entails vast energy during production. Before clean water flows from your shower, it has already incurred a considerable carbon footprint, so use that water as efficiently as possible.

The same goes for the food you eat. It is best to shift to a more plant-based diet or, at the very least, eat locally-sourced and seasonal food.

Turn your daily commute carbon neutral via walking or biking. If those are not possible, choose public transport—think of it as carpooling. If you can afford to shift to a hybrid or electric car, by all means, do so.

Be mindful of your home’s energy usage, too. For starters, choose appliances with the Energy Star label, which equates to energy-efficiency. Unplug fully-charged gadgets. Whenever possible, detox from technology. Go out and appreciate nature; listen to what it tells you.

You can take your commitment to the fight against climate change to the next level by adopting clean and renewable energy sources for your residential and commercial needs. Solar energy is a viable option as it is affordable and accessible. Most importantly, it does no harm to Mother Nature.

Gear up for change

There are 20 firms responsible for a third of all carbon emissions that exacerbate climate change. That means the bulk of moral accountability rests upon those in power. This goes without saying that you can still do your part in the fight against climate change. If these large profit-driven corporations do not care, it’s high time you do.

Through your lifestyle choices, you can help Mother Nature heal. As small as your efforts would seem in the grand scheme of things, these small efforts from environmentally conscious individuals across the planet, when pooled together, will have an invaluable impact. Start with transitioning from a traditional energy source to a solar panel system. This change will benefit not only nature but also your pocket. That right there is a deal worth exploring. Call SolarNRG now to inquire. Let us all gear up and change for the better.