Where It Counts: The Benefits of Solar Energy to the Environment 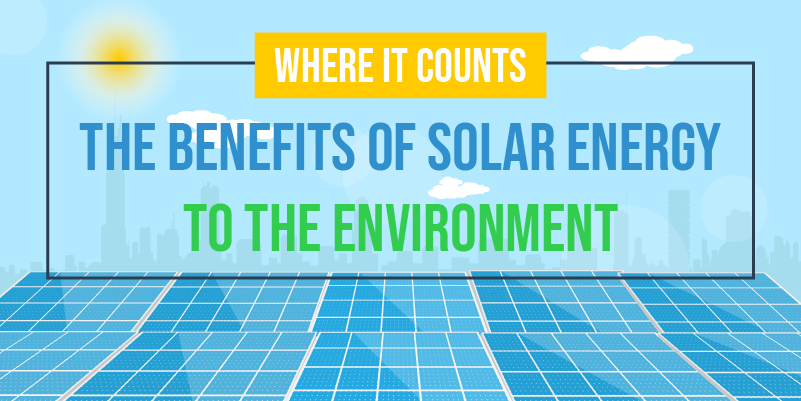 Whenever you drive on the road, pay for your utility bills, or even cook your lunch, it is most probably powered by fossil fuels. People have always relied on energy but usually overlook its hidden costs. Its consumption results in serious impacts on one’s health and the environment. But people are not always aware of these effects.

The continued dependence on fossil fuels results in climate change and can eventually lead to the extinction of life as we know it, including the human race.

Perhaps the world has been dependent on fossil fuels for energy for far too long. With the planet and the survival of life on earth at stake, it’s high time everyone does their part in saving the environment, and one of the best ways to do this is to switch to renewable sources such as solar energy.

Learn more about fossil fuels and the environmental benefits of solar energy in the infographic below.

Decomposing plants and other species have taken millennia to form the carbon-rich reserves we now call fossil fuels. They are buried under layers of rock and ocean floor. Coal, oil, and natural gas are examples of non-renewable fuels that provide energy. With fossil fuels, the world can also produce a wide variety of goods, from steel to polymers.

But everything has its pros and cons. When fossil fuels are burned, they have negative consequences for the planet. So, without further ado, let’s cut into the fat of fossil fuels. Here are eight vicious fossil fuel facts and stats.

Benefits of Solar Energy to the Environment

But despite these distressing facts, there is still hope. If the right policies are set in motion, the world can make dramatic progress toward a clean energy future. People and businesses should make efforts to reduce energy consumption, find more ways to tap into renewable energy sources, electrify almost all modes of transportation, and phase out fossil fuels.

All levels of government, the commercial sector, and local communities will have to work in solidarity to achieve this.

You can start in your own way by adding clean energy to your home, such as installing solar panels. Here are eight benefits of solar energy to give you that extra push.

The World Health Organization (WHO) reports that 4.2 million people worldwide die each year because of air pollution. Moreover, 99% of the global population inhales air that contains high levels of pollutants, with underdeveloped and developing nations suffering from the highest exposures.

Motor vehicles, household devices, and industrial facilities are prevailing sources of air pollution. What these activities have in common is that they are mostly powered by fossil fuels. Widespread adoption of solar panels can reduce pollutants from fossil fuels significantly. These pollutants include particulate matter emissions, sulfur dioxide, and nitrous oxides.

You can minimize greenhouse gas emissions, cut demand for fossil fuels, and lower your carbon footprint by adopting solar energy. In fact, even one house that installs a solar energy system positively impacts the environment. Using a clean source of power may reduce carbon emissions, the equivalent of approximately 5,000 pounds of coal annually.

Solar energy is both boundless and unrestricted. If all of its energy is harnessed for an hour, it will be enough to power the whole planet for a year. In contrast, fossil fuels are rapidly depleting. Reducing our reliance on these scarce resources and using an abundant source of energy results in reduced costs, lower greenhouse gas emissions, and ultimately, a more stable future.

Solar panels provide power that is renewable, free, and clean. All it needs are photovoltaic cells (PV) made of silicon.

While most of the world’s energy is created by burning fossil fuels, producing electricity with solar panels is unlimited and replenished constantly. It harnesses energy from solar radiation to bring light to homes, provide heat, and power vehicles. Especially with the current oil crisis and advancements in technology, solar is a cheaper and more efficient energy alternative.

Solar panels do not need water to operate. Conversely, traditional energy generation consumes 52 billion cubic meters of fresh water each year. If your power source does not utilize fossil fuels, it depends on water.

Both hydropower and nuclear energy are dependent on large volumes of water to generate electricity. And while dams are primarily built to manage water flow and generate power, they have a considerable detrimental effect on the surrounding ecosystem.

The abundance of methane, nitrogen, or carbon dioxide on the planet grows due to the burning of fossil fuels. This contributes to an intensified greenhouse effect that is heating the planet more quickly than ever. Due to the increasing global temperatures, sea levels are rising from the melting of glaciers. This causes superstorms, drought, and other natural weather disasters.

On the other hand, solar energy does not contribute to climate change because it produces zero greenhouse emissions.

7. Improves humanity’s health In the long-run

Cleaner air has a good influence on humankind’s health. In fact, experts estimate that it could save around 3 million lives per year. This is because fresh air leads to cleaner lungs. Among other health benefits, solar energy results in fewer people suffering from chronic bronchitis and other cardiovascular and respiratory diseases.

The world’s population will continue to rise, but there is only so much oil, coal, and natural gas that the planet can give. The sun is the most prevalent energy source on earth, generating 173,000 terawatts of solar energy per second. That’s more than 10,000 times the total cumulative energy usage of the whole world, and it’s always accessible.

Fossil fuels will deplete soon, and locating and extracting them will be too costly for companies. Its harmful effects on the environment and pressure on financial infrastructure may be irreversible when it’s too late. Solar might be the most excellent approach to protect the earth against the realities of diminishing resources.

With advancements in technology, solar panel installations are rapidly gaining traction. And with the sun producing more than enough power to provide electricity to the whole world, it might just be the answer to saving the planet for future generations. But in pursuit of a cleaner future, we have a lot to learn and unlearn.

With all the adverse effects of fossil fuels, it is critical to eliminate their consumption now more than ever. Take a step in protecting the environment by switching to clean solar energy. SolarNRG’s solar power panels and installation services can help us achieve a brighter future! Contact us now to learn more about our offerings!