The Complete History of Solar Energy 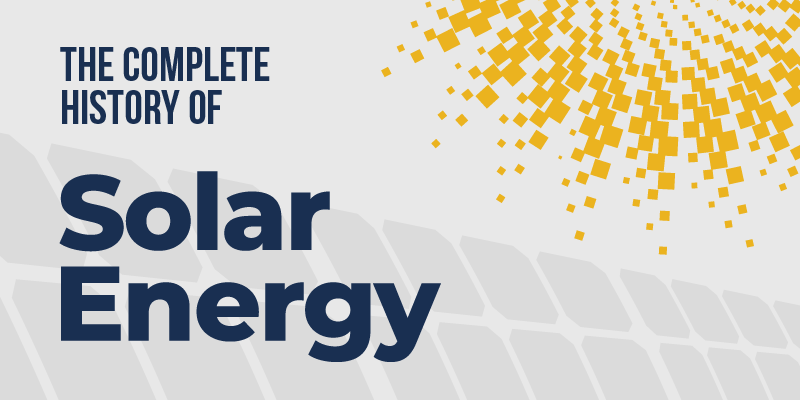 Solar energy is one of the first sources of power in the world. However, a report shared by Our World in Data shows that in 2019, only 2% of the world’s electricity came from solar energy. It may be because the formal introduction of the solar panels you know today happened in 1954. It was also just in recent years that solar panels were commercialized for regular consumers.

Solar energy has a long history, dating from the 7th century BCE when early humans discovered magnification. Since then, civilizations worldwide have used their era’s technology to harness the energy provided by the sun. All these culminated in the invention of the first solar panels and the modern concept of solar power.

To understand how solar technology evolved over the centuries, you need to go on a journey into the history of solar panels and how early ancestors used the sun’s power in their time. Learn all about it in the infographic below.

The Complete History of Solar Energy

Many ancient civilizations used the sun’s power to improve their quality of life. These methods paved the way for many discoveries about solar power. Here’s the timeline of how solar energy evolved over the years.

Using solar energy dates back as early as the 7th century BCE. Humans learned about the properties of magnification with glass materials and discovered they could light fires when using glass with sunlight.

The ancient Greek, Roman, and Chinese civilizations harnessed this method by using mirrors to light torches for their religious rituals. These were known as “burning mirrors.” In addition, some bathhouses built by the Romans used windows to direct sunlight into specific areas, known as sunrooms. The concept is still used in modern buildings today.

The Anasazi, ancestors to the Puebloans, utilized the sun’s heat by building south-facing homes on cliffs. The sunlight kept the communities warm during the winter.

There’s some debate among scientists on to whom they can attribute the invention of solar panels. Some argue for Edmond Becquerel, a 19-year-old French scientist who, in 1839, discovered the photovoltaic effect, which is the creation of a current through certain materials’ exposure to sunlight.

Further discoveries regarding solar energy took place in 1873. An electric engineer named Willoughby Smith found that the chemical element selenium was photoconductive, meaning that the material could conduct electricity when exposed to light.

William Grylls Adams and Richard Evans Day took this study further and discovered that selenium could create electricity when exposed to sunlight.

Historians argue that Adams and Day’s experiments led to the invention of solar cells by Charles Fritts. In 1883, Fritts used selenium wafers to create the first solar cell prototype, a glass box with a sheet of selenium sandwiched between a semi-transparent gold leaf and a layer of a metallic brass substrate.

Research into solar energy continued into the 1900s.

In 1905, Albert Einstein contributed to the growth of solar research and quantum physics by publishing a paper that theorized the exposure of metals to light could “liberate” electrons. The piece won him the Nobel prize in 1921, and his theory became known as the Law of the Photoelectric Effect.

Solar power research took a step further in 1918 when Jan Czochralski, a Polish chemist, discovered a way to grow single-crystal silicon. Czochralski accidentally dipped the tip of his pen into a tin pot, resulting in a single-crystal strand of tin.

The method eventually became known as the Czochralski process, which companies use to produce single-crystal silicon in solar cells today.

Silicon solar cells came into the picture in 1954 when David Chapin, Calvin Fuller, and Gerald Pearson created the first photovoltaic cell. The three researchers worked for Bell Labs and were trying to solve a problem with the company’s telephone system.

Bell executives demonstrated their invention, the Bell Solar Battery, by powering a radio that broadcasted voice and music. The New York Times called it “the beginning of a new era.”

By 1956, solar cells were available on the market but were still too expensive for the average consumer to buy. The US government was among the earliest users of the technology.

The Vanguard I, launched in 1958, was the first satellite with a solar panel installed, which powered its radios. More satellites followed photovoltaic technology, namely Vanguard II, Explorer III, and Sputnik-3.

More devices using solar energy followed. For example, Paul Macready, an aeronautical engineer, built an airplane in 1981 that used solar cells to promote them as renewable energy sources. He flew the plane from France to the UK across the English Channel and built another solar-powered aircraft, the Gossamer Penguin.

Any business or homeowner could deduct a percentage of investment costs from their taxes if they have energy-efficient structures installed. Such constructs include wind energy systems, geothermal pumps, and photovoltaic systems.

Solar panels took to the mainstream, finally becoming more affordable for consumers. The National Renewable Energy Laboratory (NREL) tracked the cost of photovoltaic systems, noting that module prices decreased by around 85% in the past decades.

Countries all over the world are also embracing renewable energy. The Conversation reported that Australia could reach 50% renewable electricity by 2025 due to its push towards installing solar and wind-powered structures.

Even though solar energy makes up only a tiny percentage of the world’s electricity, the push for renewable energy continues. Australia has shown that a country reliant on renewables is possible, and innovation continues on solar technology.

Using solar energy has come a long way from just using magnifying glasses. Aside from solar-powered cars, airplanes, and other gadgets, the sky’s the limit on the types of devices developed using solar cells.

Solar panels are also becoming more affordable as the years pass, as shown in the trends presented by NREL, which means more consumers can access solar-powered devices for everyday use.

If you’re looking to learn more about solar energy or want a company that provides solar panel installation, consider SolarRNG. Contact us today!